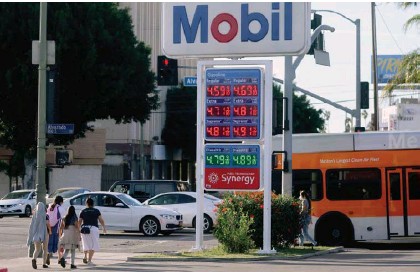 Agence France-Presse/Paris Soaring energy prices have brought massive profits to oil majors — along with fierce criticism from environmentalists and politicians at a time when consumers are left with rising bills. United States firm ExxonMobil, France’s TotalEnergies and the United Kingdom giants Shell and BP announced in the past week 2021 profits totaling a whopping US$66.7 billion. It marked a huge turnaround from 2020, when they posted losses as the pandemic emerged, prompting lockdowns that brought the world economy to a grinding halt and caused crude prices to collapse. But oil and gas prices rallied big time last year, surging to $70 per barrel after briefly sinking into negative territory in 2020. The main international and US contracts rose to seven-year highs in January and now sit at around $90. Gas prices, meanwhile, hit records in Europe. “Oil companies benefited from an extraordinary alignment of the planets,” said Moez Ajmi, oil industry expert at EY consultancy. In addition to higher energy prices, energy firms “cleaned up” their assets to only keep the most profitable ones, Ajmi said. The companies also strengthened their cost-cutting policies which started in a previous price slump in 2014. A gradual increase in output by OPEC and its allies has also helped. ExxonMobil went from a $22.4 billion loss in 2020 to a $23 billion profit in 2021. Shell was $20.1 billion in the green last year after a $21.7 billion loss in 2020. TotalEnergies went from a historic $7.2 billion loss to a 15-year high profit of $16 billion. BP’s recovery was not as big, going from $20.3 billion in the red to $7.6 billion in the green. Prices at the pump and utility bills, meanwhile, have gone up for consumers. ‘Slap in the face’ BP said the result would allow it to accelerate “the greening” of the company. But the performances at the companies triggered calls for a windfall tax on the profits of energy firms in the UK. “These profits are a slap in the face to the millions of people dreading their next energy bill,” Greenpeace UK’s head of climate Kate Blagojevic said in a statement. “BP and Shell are raking in billions from the gas price crisis while enjoying one of the most favorable tax regimes in the world for offshore drillers,” she said. “And these are the same companies responsible for pushing our world closer to catastrophic climate change.” Seeking to head off a political storm, the government of UK Prime Minister Boris Johnson announced last week a package of financial support after the state energy regulator lifted prices. The opposition Labour Party said it was not enough. Finance minister Rishi Sunak’s “energy plans last week left families more worried than ever,” tweeted Labour shadow minister Rachel Reeves after the oil companies published their results. “It’s time for Labour’s plan for a one-off windfall tax on oil and gas producers to cut bills.” Sunak rejected the tax idea. More profits With a presidential election looming in France in April, Green candidate Yannick Jadot spoke out against profits made “on the back of French men and women” while “gas and petrol bills rise for the benefit of shareholders”. TotalEnergies CEO Patrick Pouyanne said if the company paid more to governments, “It would be at the expense of investments, workers or shareholders”. But in apparent move to fend off criticism, TotalEnergies announced this week a discount at the pump in rural areas of France along with a 100-euro ($113) voucher for people struggling to pay their gas bills. Oil majors, however, could be in for another banner year for their bottom lines as analysts forecast prices climbing to $100 per barrel. “The health crisis appears to be ending, the economic recoveries in China, the United States and Europe don’t appear to be flagging, supply continues to be limited due to a lack of oil investments in the past two years and environmental pressure,” Ajmi said. “So, yes, the profit rebound of the oil majors could continue in 2022.”