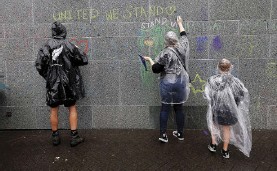 Cyclone Dovi caused power outages, mudslides and evacuations across New Zealand on Sunday, but neither the storm nor the music of Barry Manilow could dislodge anti-vaccine protesters camped outside parliament. Instead, hundreds of protesters — inspired by the “Freedom Convoy” of truckers in Canada — danced in the mud to the tunes meant to force their dispersal. Not even a tongue-in-cheek offer of help from singer James Blunt could end the standoff in the capital Wellington, which entered a sixth day with no sign of ending. Deputy Prime Minister Grant Robertson told Television New Zealand there was a “sad element” to the protest. “Every New Zealander has a right to peaceful protest, the problem is they have gone well beyond that,” he said. “I do find the rhetoric of these protests highly disturbing [...] there is a sad element to it, there is a conspiracy theory element that people have been sucked in by.” Like the Canadian truckers in Ottawa, the New Zealand protesters object to the strict COVID-19 restrictions imposed on the country and are demanding an end to vaccine mandates. Their resolve hardened after police moved on Thursday and arrested 122 people in an attempt to end the sit-in. Police have since backed off making arrests, and authorities have attempted to drench the makeshift settlement into submission by turning on water sprinklers. This only saw the manicured lawns in front of the parliamentary buildings churned into a muddy morass even before Cyclone Dovi hit. Superintendent Scott Fraser said police were continuing “to explore options to resolve the disruption”, while parliamentary Speaker Trevor Mallard had the music of Barry Manilow, the 1990s pop song “Macarena”, and government COVID-19 messages blasted at the protesters. British singer James Blunt weighed in on the strategy on Twitter, telling NZ Police “give me a shout if this doesn’t work”. By Sunday afternoon, Blunt’s “You’re Beautiful” had been added to the playlist. But the protesters drowned out the government music with their own favorites, which included heavy metal band Twisted Sister’s “We’re Not Gonna Take It”.