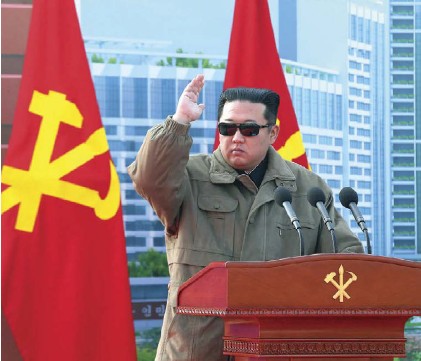 The top diplomats of Japan, South Korea and the United States declared their unity against North Korea on Saturday after a series of ballistic missile launches by Pyongyang. After a day of meetings in Honolulu, US Secretary of State Antony Blinken, South Korean Foreign Minister Chung Eui-yong and Japanese Foreign Minister Hayashi Yoshimasa condemned the series of seven launches as “destabilizing” in a joint statement. Pyongyang needs “to cease its unlawful activities and instead engage in dialogue”, they said. “The DPRK is in a phase of provocation,” Blinken said at a press conference alongside his fellow foreign ministers, using the acronym for the Democratic People’s Republic of Korea. “We continue to work to find ways to hold the DPRK accountable,” he said, citing the most recent sanctions slapped on eight people and entities tied to the North Korean government. The three diplomats reiterated their commitment to the denuclearization of the entire Korean Peninsula, and readiness to resume talks with Pyongyang, which has not responded to overtures from the administration of US President Joe Biden in the past year. “The Secretary and Foreign Ministers emphasized they held no hostile intent toward the DPRK and underscored continued openness to meeting the DPRK without preconditions,” they said in the statement. Previously, South Korea’s leader warned the peninsula could slide back into a “state of crisis” if Pyongyang followed through on threats to resume testing long-range missiles. Pyongyang conducted an unprecedented seven weapons tests in January, including its most powerful missile since 2017, when leader Kim Jong-un baited thenUS president Donald Trump with a spate of provocative launches. High-profile negotiations between Trump and Kim followed but collapsed in 2019 and have languished as Pyongyang has doubled down on military development, warning last month that it could abandon a self-imposed moratorium on long-range missile and nuclear weapons tests. In a written interview with international press agencies including AFP, President Moon Jae-in said on Thursday that any move by North Korea to restart longrange missile tests would wipe out years of effort and peace talks. “If North Korea’s series of missile launches goes as far as scrapping a moratorium on long-range missile tests, the Korean Peninsula may instantly fall back into the state of crisis we faced five years ago,” he said. Moon, who repeatedly pursued peace talks with the North during his five-year term, is set to leave office in May. South Korea only permits presidents to serve a single term in power. The country will elect his successor on March 9. Despite the lack of progress in nuclear talks, “necessary communication” between Moon and Kim has continued, the South Korean president said. The demise of the Trump-Kim talks without a deal was “very regrettable”, he added, saying the two sides should have sought a more incremental approach to making a deal. “It would have been best if a ‘big deal’ had been reached [...]. If that was too hard, however, I think a ‘small deal’ should have been sought to take a phased approach.” Although Trump’s successor, US President Joe Biden, has pursued a more muted approach to North Korean diplomacy, Moon said he expected that another summit between the US leader and Kim would take place “eventually”. “It is just a matter of time,” he said.