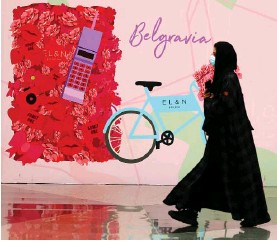 Red clothing and underwear are displayed in Saudi shopfronts, but the increasingly popular Valentine’s Day promotions are missing one thing: the festival’s name. While sales surge and Valentine’s gifts become more common among the youthful Saudi population, the word “Valentine’s” is nowhere to be seen. “Management has asked us to decorate the window display with red lingerie [...] but without mentioning anywhere Valentine’s Day,” said one salesperson at a Riyadh mall, who did not want to be named as she was not authorized to speak to the media. The displays represent change in Saudi Arabia, where stick-toting religious police once cracked down on sales of Valentine’s Day paraphernalia and even on people wearing red during the Feb. 14 festival. Valentine’s Day has vague origins dating back to Roman times, when several Christian martyrs were named Valentine. The celebration for lovers, marked widely around the world, was firmly offlimits in the ultraconservative kingdom, which would only mark Muslim holidays and its September national day. But Saudi Arabia has been undergoing social change as it attempts to present a more ap pealing image and diversify its oil-dependent economy. It has curbed the feared religious police and given women more freedoms. Among these, they now have the right to drive, and can add color to their dress beyond the traditional plain black abaya robe. These changes, however, have come alongside a crackdown on dissent, which has seen clerics and women’s rights activists detained. A jarring site “We can now put red clothes on view comfortably and even put them on the window display,” said a saleswoman at Grenada Mall in east Riyadh, who also spoke anonymously. “There are many customers requesting red lingerie during Valentine’s Day,” she added. “We have discounts during this time, but we don’t call them Valentine’s Day offers.” Not everyone is comfortable with the underwear being on show, finding it a jarring sight after decades when such items were kept strictly behind closed doors. “I don’t want to see these things,” said one woman, fully veiled in black except for her eyes. She did not want to give her name. “They bother me, but there are people who like it and this is their freedom of choice.” Times are changing, though, and many in Saudi Arabia — where more than half the population is under the age of 35 — are embracing Valentine’s Day, whether they call it that or not. “People did not celebrate Valentine’s Day, but now many Saudis do,” said Khuloud, 36, a Saudi saleswoman who did not want to give her last name. “There is a huge demand on clothes during this time, and customers are often asking for the color red and profits have also been huge.” The saleswomen said red lingerie was most in demand during the Valentine’s Day period. Shops also offered discounts on perfume and makeup, while gift stores put red hearts in their windows, also without mentioning Valentine’s. One shopper, Reem al-Qahtani, 22, said Saudi society is “gradually” starting to accept Valentine’s Day, even if it remains nameless for now. “Right now, we celebrate quietly in cafes and restaurants, but we hope that it gains traction in the coming years,” she said.