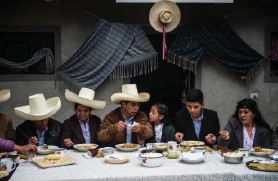 Peruvian President Pedro Castillo has adopted a unique measure in a bid to lift his falling popularity and resolve a series of political crises; he has ditched his iconic white cowboy hat. The hat has been an important feature of Castillo’s humble, rural school teacher image that helped propel him to the presidency. But for three days running this week, Castillo has appeared in public without his wide-brimmed hat. Having been forced into a fourth Cabinet reshuffle in just six months as president and with his disapproval rating hitting 60 percent, Castillo allegedly sought the advice of Saul Alanya, a leadership and self-improvement coach. “I suspect that the image ‘coach’ advised him that he had to change and should start with the hat,” political analyst Augusto Alvarez Rodrich told AFP. “The problem is that he has taken off the hat but not the ideas that were beneath it.” Castillo has come under fire during his short presidency with critics blaming his political inexperience and lack of management skills for the instability of his successive Cabinets. The 52-year-old says he is the victim of a campaign by political opponents and some media actors to try to force him from power, hitting out at “antidemocratic attitudes of certain sectors that just want to destabilize the country”. In December, he survived an attempt at impeachment, but earlier this month a far-right party announced it would file a new motion to remove him. Prosecutors are also investigating him and his associates in three separate graft cases. Amid the political turmoil, Castillo appears to have decided that the iconic headwear that contributed to his humble manof-the-people image has got to go. ‘Kidnapped’ The hat was a prominent feature on the campaign trail, although it turned Castillo into the butt of jokes by his opponents and some sections of the press. He was said to only ever remove it when entering church and was even pictured wearing it at breakfast on election day last June, alongside his likewise sombrero-clad parents. He wore it in cabinet meetings, in talks with foreign dignitaries and even at the United Nations General Assembly in New York. Peruvians saw their new president without his sombrero for the first time on Tuesday when swearing in his new cabinet, before subsequent hatless appearances on Wednesday and Thursday. He had briefly been deprived of it last week when meeting Brazil’s far-right president, Jair Bolsonaro, who stole it off his head while laughing and posing for pictures. “Help me, Bolsonaro’s kidnapped me,” joked Castillo. However, Castillo has not always been so attached to his sombrero. He did not wear it when he first came to national prominence in 2017 as the leader of a striking teachers union. Guido Bellido, a politician from Castillo’s ruling Peru Libre (Free Peru) Party, claimed last year that he was the one to suggest the hat would make a good political identity. On the campaign trail, Castillo traveled to every corner of Peru wearing his hat and even sometimes riding on horseback. He took part in election debates clad in his white hat, and so the legend was born. Luxury item Castillo’s tall wide-brimmed straw hat is typical of those worn by peasants in his home region of Cajamarca, in northern Peru. Worn by both men and women — although it is less popular among younger generations — it is known as a “bambamarquino” or “chotano” after the rural area of Chota in Cajamarca. Each hat is handmade and takes between three weeks and two months to complete. Although intrinsically linked to humble peasants, chotanos have recently become luxury items, selling for as much as 4,000 soles (US$1,000).